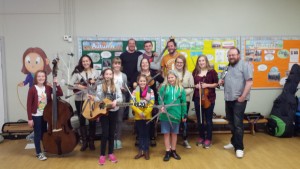 Here at the Demon Barbers, we love being involved in school and community projects. We offer workshops in folk and hip hop dance and have been invited into many many schools up and down the UK, teaching rapper sword, clog, morris and breakdancing. The music side of things often takes a back seat and is used as an accompaniment to the various styles of dance. Our recent visit to Shropshire was slightly different though…..

We were invited to take part in a weekend of music workshops with the The Shropshire Youth Folk Ensemble. The event was organised by Izzy MacLachlan (Education Director of Shrewsbury Folk Festival) and Matthew Keegan Philips (Former head of music at the Belvidere School in Shrewsbury). 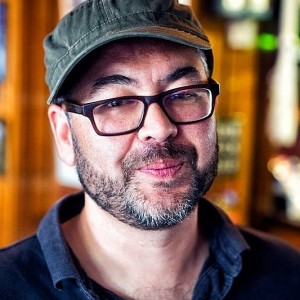 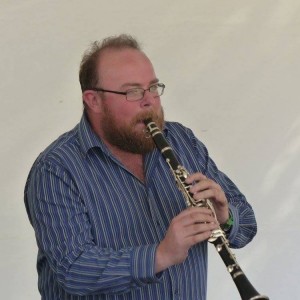 eadow CE Primary school in Bayston Hill and were greeted by Izzy, Matthew and a group of young musicians, with ages ranging from 10-16. There were lots of violinists, several guitarists, a couple of youngsters brandishing electric and double basses, and a handful of brass and woodwind players.

Despite the focus being on music, we like to keep our workshops quite physical so we warmed up with various games and a group workout before moving onto the folk side of things.

Those of you that have seen our shows will know that we like to incorporate a variety of music and dance styles, so we thought it would be great to work towards a half hour showcase, similar to one of our own concerts. To achieve this we decided to teach the children some rapper sword dancing. Shropshire is an excellent hub for all things folk, so quite a few of the participants had seen sword dancing before and picked it up very quickly.

Next we moved onto the music side of things. With such a range of ages and instruments, we needed an idea of what we were working with, so asked the group if any of them had a solo piece to perform for us. Some were reluctant and others very keen, notably 10 year old Ruby who blew us away with her rendition of Lindi Ortega’s ‘Jimmy Dean’ on vocals and acoustic guitar. We thought the piece was so strong that we arranged it for all the musicians and included it in the final performance!

We were still quite a few minutes short of a concert though, so spent the next two days singing and playing folk music with a focus on contemporary styles and arrangements. Bryony led an a cappella version of the West Yorkshire mining song –  ‘Collier Lads’ – using body percussion to add a rhythmical element, and we turned ‘The Bear Dance’ – a popular folk tune, into an epic multi-genre arrangement. The piece went on a journey through Rock, Jazz, Hip Hop and Dubstep before finishing on one of our favourites – Disco. 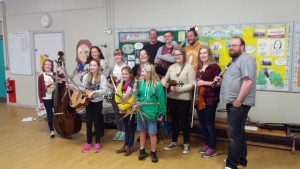 Sunday teatime came around very quickly and all of a sudden parents were lining up en masse, intrigued to see what we’d been up to. After 10 minutes of extra cramming we were ready to let them in. Damien explained what we’d been up to and then we performed the rapper dancing in two groups. One half of the group providing the music and then seamlessly swapping over. They nailed it and then it was time to take the audience on our musical journey.

The performance was spot on and was very well received, and we are extremely proud of all that took part!

We’re heading back to Shropshire in December to teach more rapper dancing, and we’re extremely grateful to be able to work so closely with people that realise the importance of folk music and dance, not only in Shropshire, but the whole of the UK.

We’d like to say a great big thank you to Izzy and Matthew and all those involved! Check out the link below for a video of the weekend’s highlights, and we hope to see you at a workshop near you!