Multi-instrumentalist & singer with Belshazzar’s Feast, Dr Faustas and Bellowhead, Paul Sartin talks about whether Glastonbury Festival does what it says on the packet

After my previous, and only experience of Glastonbury, I swore I’d never go again for love nor money. A relentless downpour, ten hours imprisoned in a fetid yurt (the inside of which was muddier than the outside), a pitiful rider, two feet of mud, and thousands of rancid unwashed bodies between me and Shirley Bassey; I could go on. However, in the same way that newly-delivered mothers swear they’ll never give birth again, only to relent alarmingly quickly; and what with childrens’ piano lessons, the electrician’s bill, cosmetic surgery (these things add up) . . . So with the offer of two gigs, and a number with Billy Bragg, I threw my convictions, self-respect and natural instinct for personal hygiene out of the window and headed for Pilton on the Sunday morning.

And I’ve been bugged by the experience ever since. It was far better than anticipated, the sun was so hot we got tanned whilst on stage, and the mud was less Western Front and more refried beans. The gigs seemed to go very well, and we were looked after in considerably better fashion than before, despite childrens’ portions in catering, and minimal transportation as la Beyoncé had requisitioned every vehicle on site. But, like the half-price noodles I had at 2.30 on Monday  morning, something really isn’t sitting right. Time to put my finger on it.

I think it’s to do with expectations. Not necessarily mine as I went with very low ones (see above). I already knew that very few of the acts were to my taste, having at long last grown out of my penchant for middle-of-the-road bland whiny stadium pop. Some I did catch (Ragu Dixit, The Low Anthem) were excellent; some dull (can’t remember); some hilariously deviant (The Insect Circus Museum).

No, the discomfort is due to the disparity between the image of Glastonbury and the reality, between the style and substance, between the USPs and the delivery. I wondered if a quick glance at its most public interface, the Festival website, might help to give some insight.

And lo and behold, the first feature to catch my attention was the ‘strapline’ on the home page, which boldly announces a ‘Festival of Contemporary Performing Arts’. To my mind, rightly or wrongly, ‘contemporary’ implies something innovative, cutting-edge and challenging. In what perceivable way do Coldplay or The Wombles (much as the latter created a stir of sorts in my childhood) represent the avant-garde? Are U2 and the Kaiser Chiefs pushing the envelope for musical experimentation, free from the shackles of commercial interests, mass-marketing and consumer exploitation? 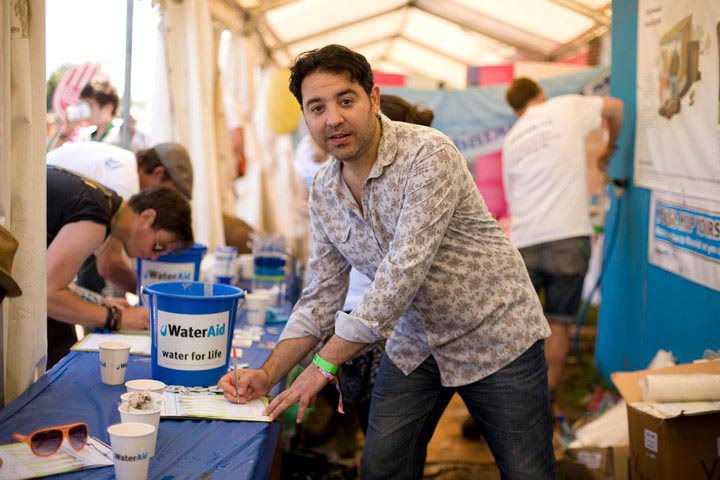 This hint at the Alternative is reinforced by the Arcadian impression of the Festival in the background design, and the logos of leading charities emblazoned at the top of the page. A stroll through many of the thoroughfares revealed an often shabby variation on High Street shopping; alternative in the choice of goods or food on sale perhaps, but no less commercially-orientated. Never have I seen such queues for over-priced, ill-designed commemorative t-shirts. The presence of charity stalls, salutary and welcome as it was, was almost negated by the high prices being charged, and paid, by the hordes of consumers seeking supposedly non-conformist retail therapy. At Water Aid, which I advocate and endorse, it was sobering to note that despite the tireless efforts of dedicated and nearly-exhausted staff and volunteers, the majority of interest appeared to come from punters seeking free drinking water (which I suppose is understandable considering the amount charged in the shops).

The flip side of consumerism is waste, and this aspect again was entirely at odds with the green and pleasant image presented by the Festival publicity. The website trumpets Greenpeace amongst as a ‘worthy cause’; ‘let’s work together’, it asks, ‘for a Bigger, Better, Cleaner, Greener, Fairer Glastonbury’ (how ‘bigger’ and ‘greener’ are related is truly beyond my ken). Bins and the disposal thereof were in shockingly short supply, and not properly sorted into recycling categories. It is understandable that litter will be left after concerts in large arenas where the crowds have no access to bins, but to my stupefaction, on every imaginable stretch of land were the detritus and a filth of (what is temporarily) a large town. It was utterly squalid and disgusting, and surely unnecessary.

And as for ‘fairer’, let’s not get started on the security issue. Whilst not normally known for their nuanced approach to public relations anyway, the bouncers, both anecdotally and in the media, are reported to have completely exceeded their brief. It may not have been Altamont 1969, but when you dance with the Devil . . .  . It’s ironic that the one place where I saw no security presence whatsoever was on the Stone Circle, at which countless provenders were, for a fee, empowering teenage consumers to stymie their neurological development and impede synaptic fusion. So, despite a couple of  successful gigs, a chance to top up my tan and firm up my thighs, and glimpses of pleasure, creativity and altruism, the Glastonbury experience has left a strange and unwholesome taste in my mouth. If it is going to live up to the expectations not only of the festival-goers, but more importantly that it sets itself, it is going to have to have a long and mindful examination of its raison-d’être. This world-renowned flagship festival has mutated from a celebration of the Performing Arts into an ode to Mammon;  all hail the day when Eavis throws the money-changers out of the temple.

Paul studied at the Purcell School, a music specialist school in London, and after a couple of years touring as oboist with the Gloria Theatre Company took up a place to read music, and a Choral Scholarship, at Magdalen College, Oxford.  After graduation he became a Lay Clerk with Christ Church Cathedral Choir, Oxford, where he spent five years singing for services, recording and touring the world. During that time he formed the duo Belshazzar’s Feast and quartet Dr Faustus, freelanced, and began his recording career and a little light teaching.