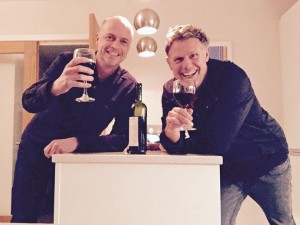 As Sting’s current recording engineer, Donal is at the top of his game (his Emmy was awarded in 2011 for Outstanding Achievement in Sound Mixing for his work on A&E’s Private Sessions, Sting at Red Rocks) he has also engineered and mixed recordings for many high profile bands such as Primal Scream, The Police and Tina Turner.

Kipper’s musical career took off in the 90s with his own band ‘One Nation’ and he soon became in demand both as a musician and producer; teaming up with Gary Newman in 1992 and being awarded a Grammy as producer of Sting’s hit album ‘Brand New Day’ in 1999. He has recently been invited to take on the role of Artistic Director for Leadbelly Fest at The Albert Hall later this year featuring, among others, Van Morrison and Jools Holland.

Since winning ‘Best Live Act’ at the BBC Radio 2 Folk Awards in 2009 The Demon Barbers have focussed on their Folk & Hip Hop Dance Extravaganza ‘The Lock In’. Following a number of successful UK tours, including high profile shows at Glastonbury Festival and 5 star reviews at Edinburgh Fringe Festival in 2013, they headed back to the rehearsal studios to begin work on the new album.

‘The album is titled ‘Disco At The Tavern’ and we’ve tried to capture all the energy and excitement of our live shows’ said Damien ‘Dance is a huge part of our lives and our identity, both Folk & Hip Hop, and it’s important for us to get this across on the album. We’re really excited to be working with such experienced producers. It’s been 5 years since our last album and we’re keen to show the world how much our music has evolved!

‘Disco At The Tavern’ will be released on 17th April at Leeds, Carriageworks Theatre  as part of a UK tour of venues and festivals of their new show ‘The Demon Barbers XL’ featuring dancers from ‘The Lock In’ along with special guests Matt Crum on Keys/Saxophone and Ali Mac on percussion

For all media or booking enquiries please contact damien@thedemonbarbers.co.uk