Lyrics by Damien Barber and inspired by Kett’s Rebellion, a 16th Century uprising in Norfolk that saw 16,000 peasants storm and hold Norwich City 4 weeks in protest over the enclosures laws that saw common land being stolen by already wealthy landowners. They were finally forced oto retreat out of the city by the Earl Of Warwick’s superior, mercenary forces with the battle eventually culminating in the massacre of over 3000 rebels at the Battle Of Dussingdale in 1549. Robert & William Kett, the landed ring leaders, were tried and found guilty of treason and hung from Norwich Castle and Wymondham Abbey.

The Adventures Of Captain Ward (2010) 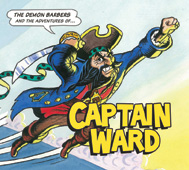 “The Barbers have pulled out the stops as they bid to make as thrilling a racket on CD as they do on stage…throw in some vigorous tune sets, the stirring political steel of Pound a Week Rise, the irresistible chorus of Rise Up and a gloriously passionate Bryony Griffith vocal on Bonny Boy and you have something of a spectacular. BBC Music – Colin Irwin