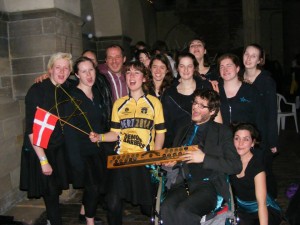 After winning the Tyzack Trophy for ‘most exciting team’ in Burton-on-Trent last year, it was the turn of our old friends, Black Swan Rapper to host the 2014 event on their own turf in Leeds. We were lucky enough not only to attend and take part, but also to be one of the sponsors of the prestigious competition.

The atmosphere was buzzing as the teams descended on the city, filling the various venues with sashes and shoes and fiddles and flutes.

Our team went by the name The Wardrobe Outlaws, the result of Damien and Bobak’s weekly rapper club, held next door to The Wardrobe at Yorkshire Dance. All of our team were new to this type of dancing and had certainly never entered a competition like this. We didn’t let the presence of the veterans put us off though, no way.

The day was a melee of at least a hundred dances across the sunny city, but as the evening came along it was time to get serious, all in one place at the showcase. The place this time was a converted church, now known as the Left Bank Centre. It was a great setting for the night’s entertainment and the hosts showed they knew how to throw a party, “swanning” around in their tuxedos while the other teams worked the stage.

After everybody had taken their turn it was crunch time – The results.

Black Swan’s funny man Bob Dalrymple was on the mike for the ceremony and he took to it with excitement and ease. The room was hyped and the whoops grew louder and louder as each award was handed out. Team after team charged onto the stage to collect their winnings, and it was as important to them as taking home an Oscar. It was a real awards ceremony!

We even came third out of three in the newcomers category! Bronze – Boom! But the overall winners were Star and Shadow who amongst other things scooped up a rather snazzy T- shirt, that just so happens to have a giant Demon Barbers logo on it! So it seems everyone’s a winner at DERT this year, but watch out for Bristol 2015 when The Wardrobe Outlaws will be at large!!!