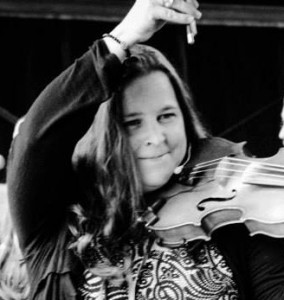 Our very own fiddle player and singer Bryony Griffith’s solo album Nightshade has been nominated for Best Trad Folk Album in The 2015 Spiral Earth Awards! The Spiral Awards celebrate the music featured on the site from January to December 2014. The ‘Trad Folk’ category covers albums that “mix traditional songs and tunes with original compositions and interpretations to create something new and vibrant”.
Nightshade has received 5 star reviews and featured in the Telegraph’s Top Ten Folk Treats. Bryony was a runner-up in The Froots Critics Awards and was also nominated for Best Artist and Best Newcomer in The Songlines Awards.

Voting is open to the public and closes at noon on Tuesday 14 April 2015.

The results will be announced on Wednesday 15 April.

“Bursting at the seams with a joyful love for English fiddle music. The breadth of experience that Griffith has is pretty mind boggling” – Spiral Earth

“A solo album of great power and magnificence. She sings beautifully and knows how to kick out a song and does it brilliantly. Wow, what a great voice.” – Mike Harding

“Fantastic! Such a lovely style and choice of material” – Norma Waterson