Bryony & Will are currently recording their debut duo album in Newcastle.

You’d think that living in the same house, Will and I would be able to find plenty of time to practise, but actually it’s very rare that we’re both in before about half nine at night, by which time it seems a little unfair to inflict melodeon, fiddle and 48 verse murder ballads on the neighbours in our little terrace. So, today we had an actual whole day at home and have finally had the opportunity to go through all the material for our debut album. EEEEK! 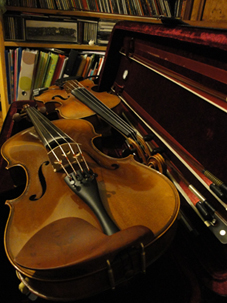 I used to hate recording with a passion. The first time we recorded with Bedlam when I was about 15, I couldn’t bear listening back to myself and got in a right state because I didn’t sound as good as I wanted to. I suppose my confidence and playing have improved over the years and I actually quite enjoy recording now – I’ve even got over the sound of my own voice. It can still be very frustrating at times though, especially when ‘redlightitus’ sets in and deems you incapable of playing something that you played perfectly 30 seconds before they pressed record.

However, I am more nervous about this recording than anything I’ve done before. I’ve recorded on about fifteen albums, but normally there’s a whole band to dilute my performance and let off steam to. Now it’s just the two of us. If it’s going wrong or we get bad reviews, it’s our responsibility alone, and that’s scary!

It can get quite heated if it’s not going well when we practise and sometimes results in one or both of us stomping off somewhere, but today was relatively calm and productive. Apart from it dawning on me that Will hasn’t got a clue what any of the songs are about. 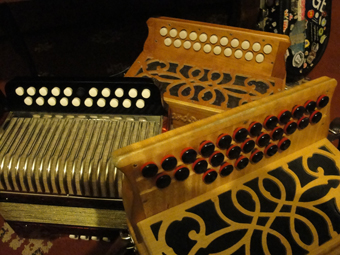 “The one where the servant man gets murdered”… Still a blank look.

I’m planning to type out copies of all the words to take with me in case of redlightitus brainfreeze, so I might make Will read them all too…a nice bit of bedtime reading.

Anyway, I should get on. There’s rather a lot to do. And there’s the small matter of a title. Maybe ‘Lady Diamond’ after one of the ballads we’re putting on it. I like the sound of it, but it’s a gruesome subject. The trouble is, we are a particularly indecisive couple. It’s taken us fifteen years to finally decide to even make the album.

We’ve got another full day of practice tomorrow. My throat’s already a bit sore and the end of my left index finger is looking decidedly ragged, but we need to toughen up for the studio.

Our old mate Andy Stephenson’s doing the recording at Quayside Studios in Newcastle and Ian Stephenson’s coming along to help, so it should be good fun…that’s what I’m telling myself anyway!

Bryony Griffith is a professional musician and music teacher from Skelmanthorpe, W.Yorks. Along with performing with The Demon Barbers she plays for The Newcastle Kingsmen, Dogrose Morris and Bedlam. She also dances with Silkstone Greens and has recently formed an official duo with her husband, and fellow Demon, Will Hampson, performing traditional English songs and tunes.