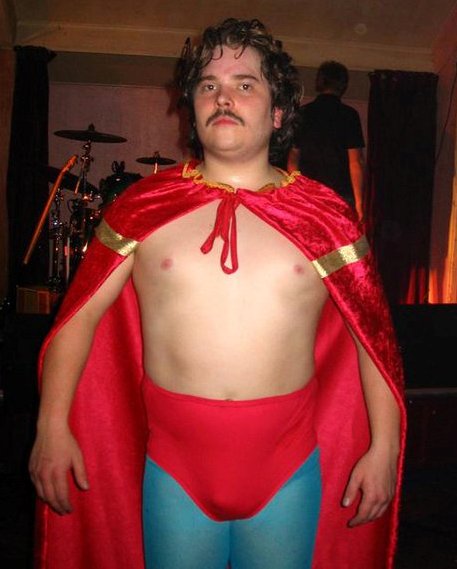 So how did all this folking around suddenly happen to a young pop music graduate? The answer is: Very quickly!

One fateful day in 2004, less than a week before the Towersey village festival, I received a phone call my from sister, Bryony. Some of you may know her. What did she want? She wanted ME to play folk music. The current drummer of the Demon Barbers had left the band at very short notice, and me being her brother, and a drummer, she thought she might as well give me a try. Why not? Well let’s just say that at the time, folk wasn’t really my cup of tea. I’d attended several Bedlam ceilidhs but that was as far as it went. Hmmmm. What to do? Well I figured I didn’t have much else on, so I may as well help her out and go for it. The next couple of days consisted of panic and practice. Bryony had given me a CD, of what I thought was ALL the material for the show, so I played along as best I could to prepare for our one and only rehearsal. The band arrived at our Mum and Dad’s house in Flockton, (where we still rehearse) and set up their strange looking instruments. “Let’s do Katy Cruel” said Damien. “What’s that?” I said. “You have learned all the stuff from uncut?” said a rather worried Damien. “What’s uncut?” I replied. It was clear that something had gone very wrong. We blasted through the tunes I’d learned (and some I hadn’t) as many times as possible until it was bedtime. We had to set off to Oxfordshire early in the morning, so our time was up!

The bass player Lee was riding with me and the gear. We’d only met the day before, but there was no room for awkward silences as the whole journey consisted of listening through the unfamiliar tracks and beating out rhythms on my steering wheel. All this was in preparation for tonight’s headlining gig. Yes, it was ridiculous! As showtime grew ever nearer, my terror grew with it, but I had to pull this off! As darkness fell the concert tent was full, it was Friday night and the music had to be right. Well I had never been so relieved in my life! Amazingly we got through the gig unscathed and it was soon time for my first night of folk festival fun. What an amazing and memorable time I had that weekend. Bryony and I had always assumed our worlds wouldn’t collide, but that week was a turning point in my life I’ll be forever grateful for. Perhaps my teacup will never be brimming with folk music, but over the past seven years it has shaped my life, and I can’t imagine not being part of one of the friendliest, most vibrant and important scenes on the planet!

Ben Griffith is a professional musician and part time barista from Clayton West near Huddersfield. His involvement in folk music began in 2004 when he joined The Demon Barbers with sister Bryony Griffith and brother-in-law Will Hampson.