On the weekend following Plough Monday, The Whittlesea Straw Bear Festival takes place. Basically, it involves a man dressed in a straw outfit, led by his keeper, dancing around the streets and pubs of Whittlesey. 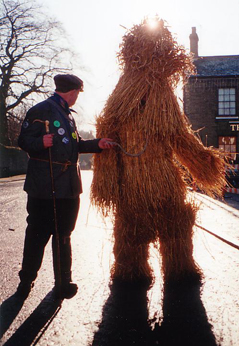 It’s a tradition that fell into decline at the end of the 19th century but was revived in 1980 by Brian and Christine Kell and the Whittlesea Society. These days, the Bear is accompanied by a huge procession of hundreds of traditional dancers from all over the country and it’s brilliant! It’s usually the only weekend of the year that I get to be a White Rose hanger on with no responsibilities. It’s also the last weekend of indulgence before I try and shed the excesses of winter festivities. We shall see how that goes…

White Rose have been going since the early days and Will’s been going since he was little. My first one was 1996, but I’ve missed a couple recently due to slaying bullocks with Grenoside and The Newcastle Kingsmen, so I was looking forward to re-living all the fun things that go with the weekend. This got me thinking about the little traditions that happen within a tradition, apart from the obvious ones of staying up late, drinking too much and suffering the customary hangovers!

On Saturday morning the dancers follow the Bear as it lumbers down the streets and through the market place. Most teams seem to have a sensible, custom-made cart for transporting the coats and instrument cases from spot to spot, but it has become traditional for White Rose to borrow a supermarket trolley. Not exactly ideal on cobbles, curbs and potholed streets crammed full of spectators and unfortunately, this task fell to me and Mary Barber as we were the only hangers on, so I didn’t actually get to see much of the Bear. 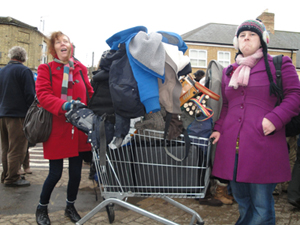 Will eventually rescued us and I watched a few of the dance spots. I have to say, White Rose were on top form and some of the new dances are really impressive, (although I might be biased because Will is currently the foreman!) After lunch, Mary and I escaped the cold and joined a session of very young and talented musicians in one of the pubs.

While we were there, White Rose kept up a new tradition: to finish off half a dance started last year…then start another dance and stop half way through. This dance will be finished off next year and so on for eternity. Apparently, the first time, they were stopped by officials for dancing on an undesignated road.

Years ago, the Bear Burning wasn’t a big event but it now includes a 2 hour dance display on Sunday lunchtime, during which time it has become customary for me to buy Straw Bear souvenirs. Already having magnets, tea-towels, badges and postcards, I now have a Straw Bear bottle opener clipped in my bag – very handy. I also treat myself to a new book from the Headingham Fair stall. I have to, it’s traditional!

At half past two, the musicians play the Straw Bear tune and everyone processes to gather round the empty shell of the Bear. The tune gradually gets slower as the Bear burns away. It’s quite eerie. It’s now traditional to take a bit of straw home with you, for good luck. Previously, you could help yourself from the burning heap, but due to health and safety, the burning Bear is cordoned off, so straw is now handed out. Being a stubborn traditionalist, I prefer to pick my own bits up off the floor, but still wanting a burnt bit, I asked one of the stewards to burn some in the flames. Silly, I know, but it’s traditional! It’s also customary for anyone in White Rose who needs a new morris hat to burn their old one on the Straw Bear fire.

There was an added bit of magic to the weekend this year too. In the early hours of Sunday morning our good friends Dougie Kell, (Brian and Christine’s son and White Rose and Black Swan member) and his wife Becs rushed to hospital two weeks early to give birth to their baby boy. And so a new generation of Straw Bearers is born…just as the old Bear was smouldering away.

Bryony Griffith is a professional musician and music teacher from Skelmanthorpe, W.Yorks. Along with performing with The Demon Barbers she plays for The Newcastle Kingsmen, Dogrose Morris and Bedlam. She also dances with Silkstone Greens and has recently formed an official duo with her husband, and fellow Demon, Will Hampson, performing traditional English songs and tunes.