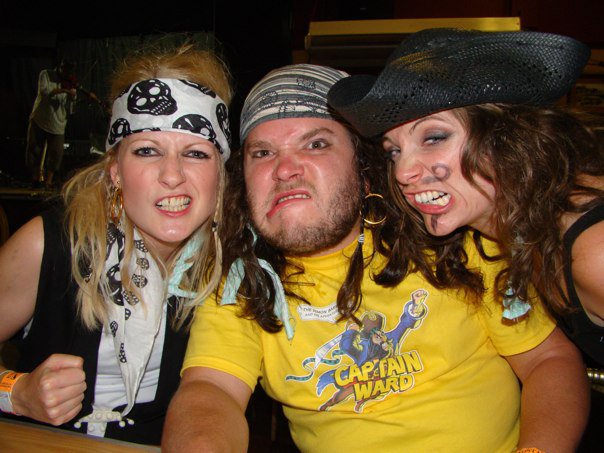 In my last post I told the tale of how I unexpectedly and very rapidly got involved in folk music. I’d like to continue the story and tell you about some of the pleasant surprises that have occurred along the way.

As you may know I travelled to my first folk festival with our bass player Lee. Well it turns out that Lee got involved in folk in a very similar, if not so stressful way as I did. As a “non – folkie” himself, Lee was minding his own business listening to “normal” music and drinking out of a glass. However, the force was too strong and soon enough he found himself in a darkened field, with the sound of fiddles and melodeons ringing through his very small but “normal” ears. So this was definitely a pleasant surprise. I had a partner in crime!

In early 2005 we recorded the album “Waxed”. My job here was to replicate the drum parts that the previous drummer Rich had written. There were a few tweaks to be made but because the tracks were already arranged there was no real need for any creative input.

The Demon Barbers had been pushing the boundaries of folk music since their formation in 2001. This was largely to do with the non-folk rhythm section, but I later found out that it’s the willingness to experiment from Damien, Bryony and Will that helps push these boundaries. They’ll give anything a try and this was definitely another very pleasant surprise.

So Waxed was completed but like with most bands, the work didn’t stop there. More material for the live shows and future albums is  always needed and this time I was involved from the very start. The process seemed fairly straight forward. Damien or Bryony would sing a traditional song and the rest of us would try to come up with something that fitted around it. Sometimes it was a bit trickier because the phrasing and time signatures of traditional songs can be very unconventional. Some arrangements worked, others didn’t  and over the years we have discarded almost as much material as we have kept.

Luckily we had been happy with enough material to record the six track E.P “+24db” in the autumn of 2007. Some of the tracks pushed the folk boundaries a step or two further. Notably “Betsy Bell”. A full pelt Drum and Bass number, and “Death and the lady” our no holds barred death metal tune. This may all sound very dramatic, but we were working on our more fun and funky side too, with our version of The Grateful Dead’s “Friend of the Devil”, which set the tone for the fancy dress dance parties we were working on at the time.

So we had another CD. Time for a rest right? Wrong! It was time to start work on another full length album. Songs were sung and we played along as we always had. Something wasn’t quite right though. The tunes seemed to be taking longer to evolve and when we assumed they had, we still weren’t quite sure about them. I thought something had to be done to funk things up a bit and as I’d majored in composition I had some tunes sitting around at home unheard. I never thought the rest of the band would be up for using them though, and because they were mostly centred around bass lines I didn’t want to step on Lee’s toes. Yes he’s my partner in crime but he’s the one with the bass!

Ok so I plucked up the courage to ask the others if I could bring some material along with me, thinking they would be cautious about a change to the way we approach our compositions. Their reaction was the exact opposite though. To my surprise they thought it was a great idea, so we jammed out the bass lines and things seemed to gel more quickly. Rather than playing along to traditional songs, it was now a case of finding songs that fitted with the riffs. I remember grinning from ear to ear when we first played my old tunes out to an audience. I never thought they’d be heard by anyone other than my college friends and tutors, but they are now set in stone, well plastic, as part of our third album “The Adventures of Captain Ward”.

In 2009 The Demon Barbers won the best live act at the Radio 2 folk awards. We are still extremely flattered and proud of this recognition and we were nominated in the same category again in 2011. Well we didn’t take the prize this time, but I still felt like a winner. Why? Well every guest is given a few treats on their table, including the Folk Awards CD, with one track from each of the nominees. They’d picked our album’s title track “Captain Ward”, one of only a few that had incorporated my old college work. I never thought it would go further than my bedroom and certainly not be given out by the BBC at an awards ceremony!

I can’t thank the band enough for giving me the opportunity to get my music out there, and to my amazement, people even seem to like it! Well…….what an extremely pleasant surprise!

Ben Griffith is a professional musician and part time barista from Clayton West near Huddersfield. His involvement in folk music began in 2004 when he joined The Demon Barbers with sister Bryony Griffith and brother-in-law Will Hampson.